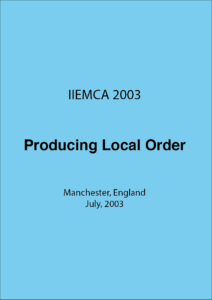 The second Manchester Conference of the IIEMCA, titled “Producing Local Order”, was held at Manchester Metropolitan University. The conference was attended by 130 scholars from around the world. Keynote Talks were given by Doug Maynard (University of Wisconsin), Eric Livingston (University of New England, Australia), Anne Rawls (Wayne State University), Harold Garfinkel (UCLA), Mike Lynch (Cornell University), Ken Liberman (University of Oregon). Harold Garfinkel was unable, on medical advice, to make the trip to Europe so he connected by Video conference to the conference hall and gave a paper, “Phenomenal field properties of the order of service in formatted queues and their neglected standing in the current situation of inquiry” mostly devoted to explaining “unique adequacy” through the example of forming queues to get services. Doug Maynard’s presentation was a master class in how ethnomethodological analysis of talk should be done. It consisted of a comparative analysis of autistically intelligent speakers with his own students in dealing with “What do you do when” questions. Mike Lynch’s talk involved analysing expert witness testimony rulings concerning fingerprint evidence. The analysis focused upon practical legal reasoning around the issue: “Is it scientifically reliable?”. Anne Rawls gave a wide ranging theoretical talk that demonstrated the relevance of EM in locating the problem of social order in an increasingly “globalised” Sociology. Ken Liberman reported on his research on Tibetan philosophical debates. His fascinating talk, illustrated by video data, was entitled “Respecifying reason as a local orderliness”. Eric Livingston gave a presentation on playing checkers, “Ethnomethodology-in-the-small”, actually dealt with questions of time, space, gestalt and phenomenology and reasoning. In addition to the six Key Note talks, there were 29 paper sessions involving more than 90 papers. The shorter papers ranged across everything from driving through an intersection in Dar-es-Salaam, ER patients in Tokyo, Sex-change patients in the UK, rape victim accounts in Egypt, and Dorm behaviour in a US college or Wittgestein and the Theory of Mind. The presenters ranged from Wes Sharrock (Manchester), Paul ten Have (Amsterdam) Baudouin Dupret (Cairo), Nozomi Ikeya and Yoshi Fujimori (Tokyo), Jiri Nekvapil (Czech Republic), Barry McGrath (Australia), Ruslan Bajramukov (Stavropol, Russia) and many others. Some compared with the keynote speakers in fame and status, others were doctoral students presenting for the first time.